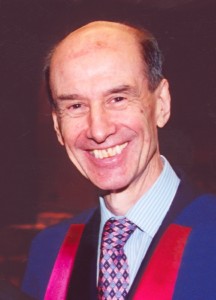 Mr Leo F. Goodstadt was the Hong Kong government’s chief policy adviser from 1989 to 1997. As the first Head of its Central Policy Unit, he was responsible for strategies dealing with a range of complex economic, political andsocial issues.

He arrived in Hong Kong in 1962 as a Commonwealth Scholar to undertake research in land economics after studying economics at the Universities of Manchester and Oxford. In 1964, he was appointed Lecturer in Economics at this University. He has since maintained a close connection with this institution, having served asHonorary lecturer in the Faculty of Law and Honorary Research Fellow in the Centre of Asian Studies. He has authored and contributed to books on economic and political trends in Hong Kong and China.

From 1976 to 1989 he was a consultant economist whose services were retained by a number of leading financial institutions with substantial assets in the Far East. His principal involvement was with business developments in China, following the adoption of the open door policy in 1979, and with the internationalisation of Hong Kong’s banking and financial services.

From 1966 to 1976, Mr Leo F. Goodstadt was deputy editor of the ‘Far Eastern Economics Review’. He also served as Hong Kong Correspondent for the London ‘Times’ and ‘Euromoney’, contributed regularly to the BBC and for ten years, presented a weekly public affairs programme for ATV.